Copper and Midnight patiently waiting to be let in the house.

I’ve told you about our cats, Midnight & Copper. They are litter mates. We got them when they were just a few weeks old. One of my clients came into my salon asking if I knew of anyone who might want a kitten. A stray cat had somehow gotten under her house and gave birth to a slew of kittens! That was nearly thirteen years ago. They are beautiful long haired , part Maine Coon cats. I’ve never thought of myself as a ‘cat person’, but apparently somehow I morphed into one! I grew up with dogs and have always loved dogs, but I must admit I love my two cats. They kinda grew on me. I know I can speak for Scott when I say that he too has developed a deep fondness for the little fur balls!

Every evening when we are relaxing in front of the TV , wine in hand, there is a sprawling cat in both of our laps. They are equally connected to us, apparently they have developed a fondness for us,( although they wouldn’t want the neighborhood cats to know about it! Shhhh). They pull their weight around here too by ridding our property of pesky rodents. At times they even leave us one as a token of their love, which I NEVER appreciate! The thing about cats that I would never be able to tolerate is the destruction I have seen other cats inflict upon furniture and drapery. When my cats were very young I invested in a double sided tape that I was told to use as a training tool. I put that tape any place I thought they might try using as a scratching pole or anyplace I saw them thinking about scratching . This seemed to alleviate any misguided ideas they may have had to ever use my furniture as a place to scratch. I always provide plenty of scratching posts and pads slathered in catnip! After I knew they had gotten the idea about the appropriate scratching posts,( which was several years) I removed all the tape. Now they really never destroy anything with their claws, this is a good thing. The other bad behavior a had heard about was ‘spraying’! I have never seen my cats spray in my house, if I did ever see such a thing I would not be a cat person! And unlike dogs, somehow cats miraculously use the litter box without fail! I will never understand how they so instinctively know where the kitty toilet is but wow, what a great benefit to having cats! I’ve never found any cat poop or urine anyplace but the litter box!
So, here lays the problem, I’m struggling with what is the best thing to do about the little guys in terms of our move abroad. At first I thought, well, of course we ‘have’ to bring them with us! But now that our move is fast approaching I find myself doubting my initial instincts. I have had many expats comment from both sides of the spectrum . Those who relocated with their pets and those who unburdened themselves of the difficulties that come with moving to a new country with a pet by finding new homes for them before they moved. Difficulties not only for the humans but also to the animals. There are certain risks involved for cats traveling in cargo on airplanes. Not to mention the trauma they will face being locked up in a crate and spending a very scary day being jostled around by airport staff. The thought of our guys going through such a thing gives me a stomach ache. Then again, I find myself thinking,” well, it’s just one really yucky day for them!”. As apposed to the trauma they would face for the rest of their lives being given away to complete strangers . Again, stomach ache! Yikes! Can you see my dilemma? I haven’t even mentioned the possible difficulty we may face when looking for a rental house with a landlord who will trust that me and Scott will be responsible pet owners. Oh, brother!
There just doesn’t seem to be an easy answer to this very painful decision. Another consideration about bringing them along is the fact that in Panama as well as most of Central America, dogs generally run free. They may be strays or they may have homes but the owners very rarely if ever confine them to their yard. This could prove to be a danger for our cats. They would have to become indoor cats for sure. Given the fact that they are getting to be old men, they spend most of their time sleeping ! I have spoken with expats who have relocated with pets and the animals not only survived the journey relatively unscathed but have adjusted quite well to their new home. Scott ad I both feel quite strongly that when we took on the responsibility of pet ownership we did so with a conviction to care for them to the best of our ability until the end of their lives. That being said, we would be remiss if we. Did not take the time to really consider what is best for them in this situation . The problem is, I’m just not totally sure yet . There’s a very fine line between what’s best for the cats and what’s best for us? Hmmmmm! I’m sure in the end we will do what’s best for all but at the moment it’s a quandary that we must carefully consider. Just one more step to take as we get this Adventure rolling!

Copper is the king of kicking back! 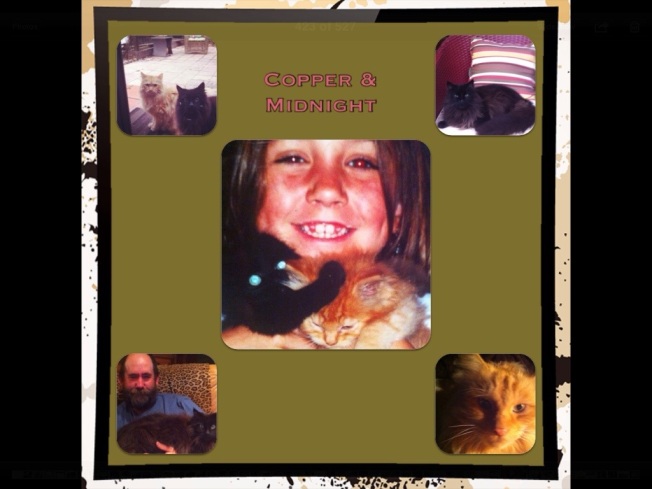