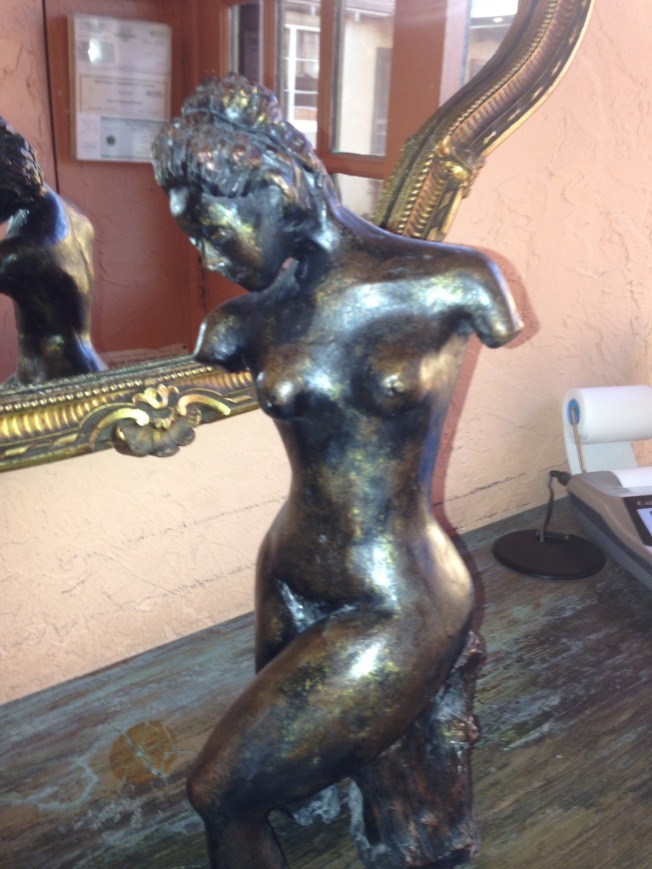 Several years ago , I began to search for a new hobby, something new to learn . I was in the thick of the yucky “troubled teen” era of my life and felt as though I were drowning in my woes. So my solution to this sensation of drowning was to lose myself in some form of creating something beautiful. I have found solace in my life during times of crisis , by allowing something beautiful to come forth from my hands. I’ve learned that there is a transformational process for me when I’m involved in an artistic endeavor. While I lose myself in the process of creating something, I am simultaneously finding myself . That may sound weird to some people but for me it’s miraculous. I think everyone has their own way of navigating life’s challenges , this is mine.

I have a client named Maria Koretz who is an incredibly talented and successful figurative sculptor. One day,when I was chatting away with her about my quest for some new artistic endeavor, she had a lightbulb moment! ” Hey, you should join my scupture group!” She went on to tell me about the group of artists she had been meeting with for many many years to practice sculpture. They call themselves the Sculpturistas ! Who could resist checking out a group with such a name? Well, I had never formally worked with clay and I must admit the thought of attempting to create a human form out of clay was intimidating. Maria assured me that it was a very supportive group and she thought I would fit in well. She promised to help and teach me and she was just positive I would be a natural, I was not so sure but decided to dive in.

The group was officially organized through an art organization called the Pacific Art League and it was called an uninstructed figurative sculpture workshop. They met in a studio in Palo Alto and they acquired nude models through a professional agency to pose for the class. I gathered together the list of materials that Maria had instructed me to bring and with much internal hesitation, headed off to join in my very first attempt at figurative sculpture. On that first day in the studio I must admit that walking into the room and seeing a woman standing completely nude in the middle of the room made me blush. (This initial feeling faded quickly ,as I became accustomed to seeing the model as an inspiration.) After introducing myself to the group and receiving a warm welcome, I proceeded to get out my clay and my sparkly new tools and plop my hunk of clay on the sculpture stand to begin , what? Hmmmm… Where to start? First, I began to study the body of the model and soon began to see shapes and movement and curves and lines , the nudity of the model began to morph into art. With some gentle guidance from Maria and lots of encouragement from the whole group, I just began to attempt to shape the clay into my interpretation of the pose that the model was so beautifully holding. The 2 1/2 hour session flew by as though it had been 20 minutes!

I was hooked! I had found a new love, figurative sculpture! It is so amazing to me that a lump of clay can be transformed into a beautiful shape and that my two hands did the shaping. I’m so grateful that I ignored that inner voice that automatically says, ” You can’t do That!” . If I listened to that negative voice inside my head I would miss out on so many amazing experiences, (Like Moving to Panama!) I spent about 3 years with this marvelous group of men and women and soon found myself feeling like I actually belonged with the Sculpturistas. I am far away from being as accomplished as any of my fellow sculpturistas but my heart soars when my hands are in the clay and that’s the most important thing to me. I’ll never make a living at creating sculpture but I will always find great pleasure in the process of transforming the clay into something beautiful. I am so grateful to Maria for inviting me to join such an inspiring and supportive group of artists. I will miss the Sculpturistas so much. Sigh!

I have been keeping an ear opened for signs of any artists in Boquete who work in clay . The other day I read a posting on one of the news emails I receive from Boquete, about a class for working in polymer clay. I immediately sent off an email to introduce myself and got a message right back. I asked her if polymer clay was the only type of clay she works with and this is what she said, “hi Holly – Thanks for writing. I work only in polymer clay. The person you might wish to contact is my friend Donna Roes who does beautiful work in natural clay, has a kiln. You can check out her web sight . I am copying her here so that you and she can communicate. Good luck, and get in touch when you get to Boquete.” It looks like Boquete has some sculpturistas too! Whew! I’m excited about that ! 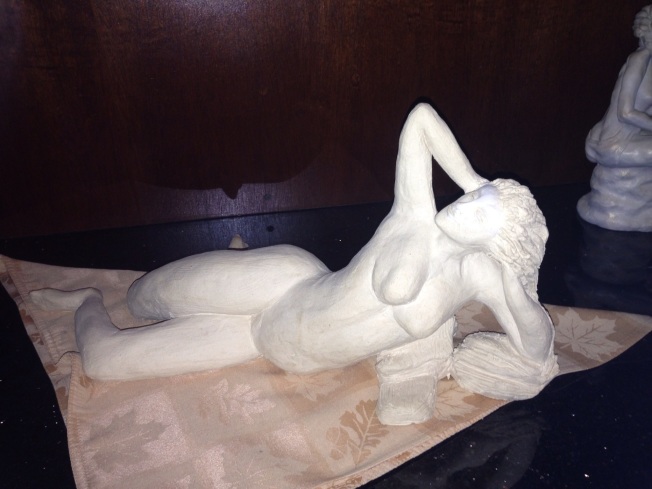 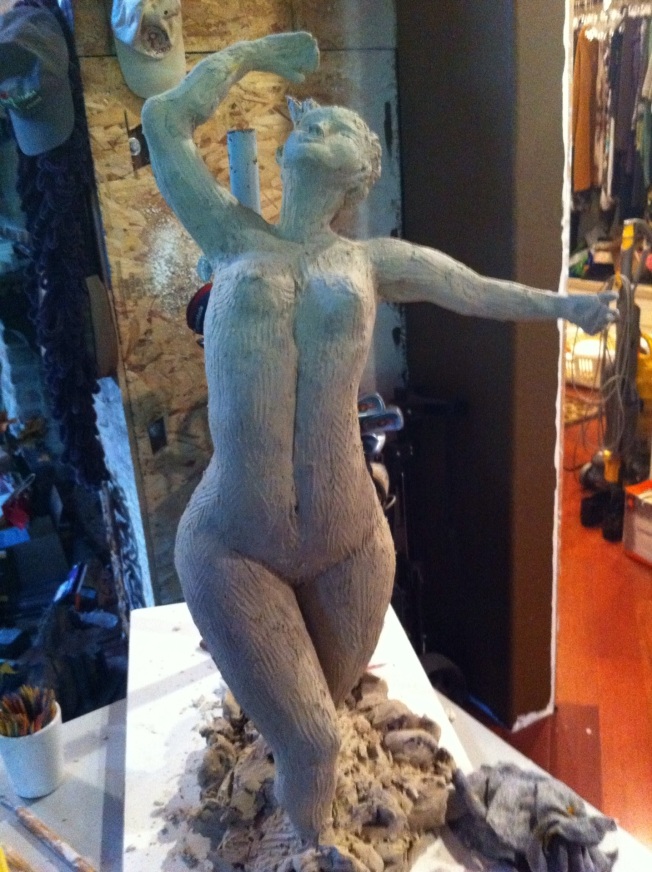 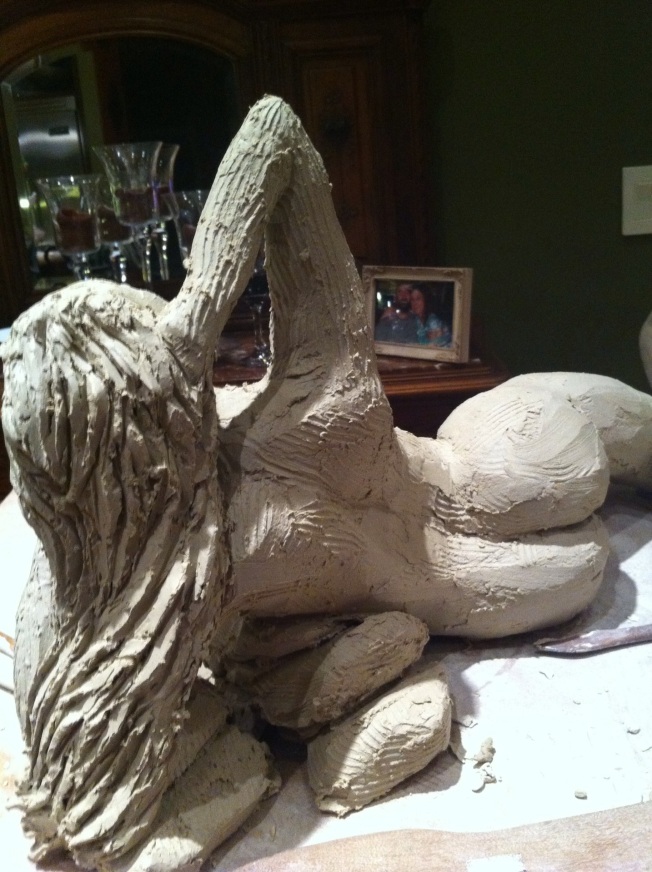