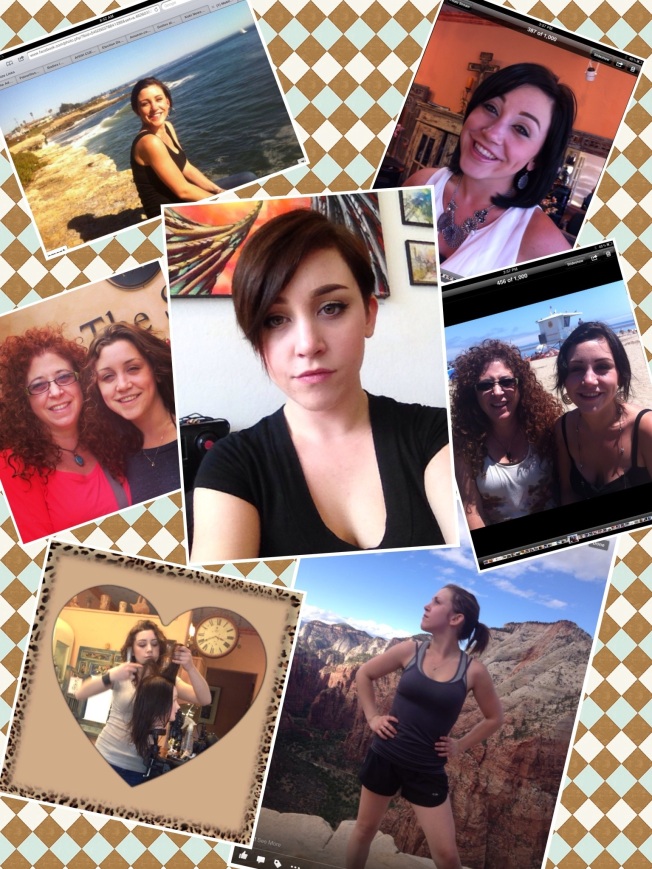 I´m sure many of my friends from Los Altos are wondering what Mariah’s been up to…most of my clients were used to getting an update on that little girl every six to eight weeks for most of her life, so it’s been a long time since I’ve gotten you caught up on her life. As you’re aware, I’m sure… I’m happy to report that those nightmare teen stories are a thing of the past….Sigh of relief! Not only did we all make it through those sad, dark times, but I believe I can say that the path she chose, although extremely painful and tremendously scary for all of us who witnessed it, was instrumental in making her the strong, independent, self assured young women that she is now. It would have been nice to have taken a little less rocky path, but “Oh Well!”.

Mariah is,of course, a very busy young lady these days. She’s working hard and I hope balancing that with some fun as well (I’m pretty sure she’s got that!). She’s working at Outrage, for those of you who don’t know, this is a salon in the town where I used to own a salon. Outrage is a larger salon on Main Street in Los Altos and it’s a very good place to start out. Many of the Stylists I know who have worked in town for years started out working there early in their careers and it’s got a great reputation. Right now Mariah’s working as an apprentice to the owners of the salon. She really enjoys it and tells me that she’s learning a lot! She get’s to do models and has been slowly working up to getting to be a full-fledged stylist there. I just love when she calls me from work after having done a “really cool haircut”. I can hear the smile in her voice when she’s feeling really good about a haircut or hair color that turned out really good. I remember those days and that feeling of accomplishment when you nail a hairstyle and a client walks out of the salon with a smile on her/his face. It’s such a wonderful feeling. Of course there’s also the clients who you just can’t please or they’re just not especially easy to read and you just aren’t sure if they were happy or not. Yuck, I hate that! I have to laugh( to myself of course), when she tells me it took her two hours to do a men’s haircut! Oh my! She’s such a perfectionist, that poor guy….although she’s awfully nice to look at so I’m sure he didn’t mind too much! There have been days when she frets about her career, she wonders how she’ll ever build a clientele like I had or like the other more seasoned stylists she knows have built. I remind her that she’s just at the very beginning of her career and I always try to encourage her to just soak up all the knowledge that she’s being exposed to right now. She’s spent her whole life around this business and is so anxious to be successful. I have no doubt in my mind that she’ll someday look back on this time and it will feel like it was just a blink and then she’ll wish for the day’s when she wasn’t so crazy busy trying to squeeze people into her busy schedule!

As if working hard on her career of choice during the day were not keeping her busy enough..she’s also working hard at night as a server at Scott’s Seafood restaurant in Downtown Mountain View. I’ve never worked in food service myself, unless you count working at Burger King (do we count that Julie?). But I do know that its a brutal job! On your feet till late at night, dealing with the public, which is not always fun. Although I’m sure it’s great practice for being a stylist. She’s got great people skills and I bet working as a server gives her loads of motivation to keep working hard at the salon so that one day she can support herself solely on her income from being a stylist.

Given the fact that she’s only 21 years old, I gotta say, I think she’s kickin’ butt! Two jobs and supporting herself at her age is very impressive. I hope she realizes and feels proud of herself because not many young women her age can say that they’ve accomplished that total self sufficiency at such a young age. She’s living in a great big Victorian house in Downtown San Jose with three other young women. She’s lived there for a little over a year and originally found the place on Craigslist. So when she moved in she didn’t know the other gals at all. Now they’re all great friends and seem to live together pretty well! Amazing! Four young women living (mostly) in harmony? Huh! I wonder how she got so fortunate to have found such a great living situation. I’m just so happy that she did!

I get asked a lot if she has a boyfriend or significant other. Well, I’m not totally up on all the details about that, I am just the MOM after all (eye roll here!)! But I do know that she’s a very strong, fiercely independent young women and if a man is going to last in her life for long he needs to appreciate that about her. She’s also pretty steadfast about honoring herself and not losing who she is, or sacrificing her needs for any other person. I’m sure she would love to have a healthy, lasting partnership with someone but , it just doesn’t seem to be the time for that quite yet. She’s got so much on her plate and I know that when the timing is right, then the right person will show up. Easy for me to say, but maybe not always so easy to embrace.

One big thing that’s been becoming progressively harder and harder to embrace both for her and for me, is living so far away from each other. Sigh…I knew this would be the hardest part of moving to Panama, being so far away from Mariah. And I was not wrong. The holidays proved to be the most difficult time so far. I’ve been with that little girl for the last 21 years and not having her around me during the holidays hurt my heart. Of course we text each other and we use Facetime and Skype and we talk on the phone via Magic Jack, but (sigh…) it’s not really the same as being near each other in real life. When I start to feel especially down about this I remind myself what it was like when we did live near to one another…we really didnt get to spend much time together then either. Of course , somehow just knowing we could see one another any ol’ time just felt good. It’s very true that you don’t always know what you had till you don’t have it anymore…I also continually remind myself that this is the way of life…kids grow up and eventually have their own lives, separate from ours. Sigh… It’s a natural progression in life even though I decided to be the one to ‘Leave’, it’s not so uncommon. I’m sure there will be times when it’s not so hard and other times when I long to give her a big hug. Like right now, as I write this…I just spoke with her on FaceTime. She had a minor car accident yesterday (she’s fine, just the car is not so fine) and her car is incapacitated until it gets repair work done. So it’s her day off and she’s fretting about how she’ll get from San Jose to Los Altos for work. My poor little girl is just curled up on the couch feeling down and I wish I could be near her right now… Oh, the perils of being a grown up. Although, had I still lived nearby I would very likely have been working my normal 10-12 hour days and would have had very little time or energy to be much help, sad, but true. She may not know it but I’m constantly giving her ‘virtual’ hugs from Panama! They come in the form of a random text message, just reminding her that I’m thinking of her at that very moment.

She plans to come visit us in Panama in May and I have so many fun things planned to do with her while she’s here. She thinks she will have about 3 weeks to spend with me and I plan to make the most of every moment. I’ll probably take the bus to PC and meet her when she arrives that way we can ride the bus back to Boquete together and just catch up. Then after showing her all around Boquete and introducing her to all the amazing people who we’ve met here I’ll see what sort of activities she has in mind to do…I know rock climbing will be on the top of her list. Maybe zip-lining, rafting, hiking, lot’s of dinners out. I plan to take her to Bocas Del Toro and if it works out maybe I can take her to spend a couple nights at Rambala Jungle lodge on our way. Boca Chica might also be on the agenda and so many other things that are too many to list! I’m so looking forward to her visit but I don’t know how I’ll ever let her leave!! I know Scott is also looking forward to her visit and will need to figure out a way to get a little time off to have some fun with us too. So, as you can see, Mariah is doing very well indeed and has created quite a nice life for herself. She seems to be just where she is meant to be right now at this stage of her young life. Doing all the things she wants to do (maybe working a little bit more than she would ‘like’ to work…welcome to adulthood!) and building a career as well as providing herself with plenty of happiness and is surrounded by good people. I’m, oh so very very happy for her and not a little bit proud of who she is!