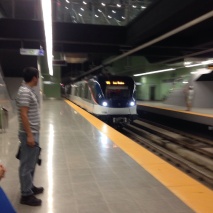 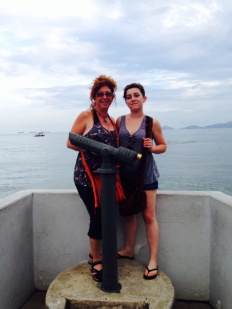 Well, all the waiting and anticipation is over and my precious daughter is finally here with me in Panama. I had the best Mother’s Day ! It’s been almost a whole year since I’ve seen her and to have her right here next to me makes my heart so happy. Her journey went well and she arrived in Panama City without having any problems with her flights from California. I must admit, I had a bit of a panic attack when she told me that her friend was arriving at her house in San Jose at 6:30 to drive her to the San Francisco Airport for an 8:30 P.M. flight! “WHAT!” Oh my god, I was quickly texting her that she needed to get to the airport at least 2 hours early for an international flight. She had a layover in Vegas but her bags would have to be checked in for the international flight. The drive from San Jose to SF is at least 45 minutes, which means she would not get to the airport until after 7:00 for an 8:30 departure. This is her first time traveling internationally and I was very nervous, I know….”Where’s that ‘tranquilo’ Holly?” Humph! The possibility of her missing the flight had my stomach in knots! My daughter has a natural ability to have that affect on me…hah! Some things never change…

I was relieved when she texted me from her gate and all was well. All that worrying for nothing…whew! She even had time to help a lost elderly lady who was terribly disoriented and confused to her gate and was rewarded by the attendant at the gate by being upgraded to first class! How great to see karma at work! She’s such a sweet young women, and I’m such a proud MaMa! 🙂 Too bad it was the short leg of her journey!

Thanks to my friend Emma, who we are staying with in the city, Mariah’s first day in Panama was so incredible. Emma drove us all over the city and was so enthusiastic, making sure we got to experience all the ‘hot spots’! First, she had made a reservation at a really nice little Boutique hotel in Casco Viejo that has a very high end restaurant , for a Champagne Brunch. For those of you who don’t know, Casco Viejo is the old Colonial area of Panama, the Old Panama City. It’s a wonderful area that has begun to experience a big renovation in these last few years. Its a Unesco Heritage Site, narrow brick paved streets, beautiful historic buildings, lots of trendy restaurants and hotels as well as lots of cute touristy shops. Mariah has never seen anything like this and her eyes were as big as saucers! I think her first day in Panama has been pretty exciting and not a little overwhelming. After a marvelous lunch we strolled around a bit and the headed back to Emma’s apartment to relax before the continuation of our tour.

Emma whipped up some refreshing Lemongrass vodka cocktails and we all headed to her rooftop swimming pool to cool off from the heat of our tour. Of course chilling in the pool wouldn’t be complete without floaties…Of which Emma happens to have a nice collection of , stashed away in her laundry room! So off we three marched, floaties and cocktails in hand, down the elevator to float around in the cool pool and chat about all sorts of fun girly things! After our refreshing float, off we went to continue our adventure. Next up…The Panama Canal, of course! A tour of Panama City just wouldn’t be complete without seeing the Canal, right? I had never been to the Mirafloras visitors center and it was really fun to see it. Scott and I have done a boat tour through the canal but never seen it from the visitors center. We walked through the museum and stood on the observation deck to watch a big ship pass through the locks. After leaving the canal we headed out to the Amador Causeway to see a little Smithsonian museum called the Punta Culebra. The museum has touch tanks to touch starfish and sea slugs and they have a big sea turtle and lots of creatures native to the oceans around Panama. Also, they have about 15-20 sloths that live in the trees surrounding the museum and we spotted four of them snoozing away in the trees as we walked around! It was a cute little museum and we had a good time. Then we ended off our day at a restaurant out there that has a beautiful view of the skyline of the city called Leños y Carbon . As we ate a delicious meal we watched the sun set and the lights of the city begin to come alive…perfect ending to a perfect first day in Panama City for Mariah!

As I’m typing this post Mariah is dead asleep! Emma has left for work and we’ll head to the bus terminal for our 7 hour journey to David as soon as Mariah wakes up. We get to use the brand new subway to get to the Allbrook bus terminal. For those of you who don’t know this, Panama has just opened a brand new subway just a few weeks ago! Its really great! I’m excited to get to use it for the first time. There really is a lot of construction going on in the city, lots of improvements to infrastructure and its wonderful to see. I’m hoping to get going soon so that we get to David in time to grab dinner before heading up to Boquete. Scott is picking us up and Mariah is so excited to see him. We have a little over 3 weeks together and I’m planning to enjoy every moment with my daughter! Its so much fun to introduce her to my new home and to share my adventure with her.