Its not a good day. We’ve decided to just pay the $3,000.00 to the lady who’s car was damaged by our former employee back in July. Instead of pursuing the young man who is legally responsible for at least half of the damage. We know that there will never be any way he would be able to make that kind of money , and we just want to put it behind us and move forward.Ugh! Scott is beyond unhappy about such an injustice. The employee had assured us that he would take care of her damages so we had hoped to only have the repair of our car to have to pay for. Nope. He did nothing. For being honest, trusting people we are rewarded by paying his debt and feeling punished by his wrongdoing. Sigh… Sometimes I wonder about people. And I wonder if he realizes how we have been affected by his stupidity. The time and energy and now money that his bad decision has cost us is just really frustrating.

In the midst of so many different things going on in our life at the moment, we had to go to our attorneys office today to give him the check and we thought we would be signing a power of attorney. Well, it turns out we need to go the the courthouse to sign the document so that it will not need to be authenticated in David. So, now its 3:00 and we have to be at the courthouse at 4:30, I will have to drive our workers down the hill and meet Scott there. Scott will have to take a shower and change clothes first, he’s been working all day. I still have to go to the market and get some food. We have nothing for dinner. We are trying to get our stuff together to go to Panama City on Saturday to deal with the final application process for our Cedula’s. Scott had to go pick up granite in David that we had ordered a couple of weeks ago. The car mechanics came to tune up the cars this morning. He found yet one more problem with Scotts (brand new totally trashed ) truck that needs to be repaired. Yes, it is a result of our former employees drunken joyride! Ugh!

Do I sound bitter? Well, I think I just might be. I’m mostly just venting and I’m sure I’ll feel better tomorrow. But, right now, after writing a $3,000.00 check to pay someone else’s debt, I’m not happy. And I haven’t even paid our attorney yet! Sheesh! Nor have we had the time to have Scotts truck repaired. So we cant drive his truck at night because he has no working tail lights and only one working headlight. Who knows how much money that will cost us. Honestly, I don’t normally like to wish bad things for others but I gotta tell ya, I hope Karma hits that kid one of these days and that someone does something in his life that is equivalent to what he has done to us. I feel awful for saying such a mean thing. But, hey…it’s true..at least right now, in this moment it is. I don’t even know if I should even post this rant of mine. It seems so negative and I really hate to put this kind of energy out there. At the same time, I feel like I only post reports of bliss and joy, when this , right here is also part of our story.

I’ve thought about trying to see if he might be interested in righting his wrong by agreeing to pay us back in very small payments. Even like $20.00 a week or something. But, I don’t know if I should even bother. Just cant really take anymore disappointment. I think Scott and I will just have to figure out how to find some sort of peace in our hearts about this. I know we were too trusting, but seriously I don’t think we will ever be in a constant state of distrust with people. It’s just not in our nature to be suspicious and leery of people unless we have a valid reason to be that way. We will just be more discerning about who we give our trust to. And today is just a bad day, we are both a bit more stressed than we can handle gracefully. Scott is in an especially nasty mood, impatient, angry, unhappy and maxed out emotionally and physically. We need to take a deep breath and find our center. Its good we are going to PC for a couple of days. Maybe we will decompress a little.

Well, as you see, yesterday wasn’t the best day for us. Scott didn’t wake up feeling much better today, he kinda hit an emotional wall I think. For those of you who don’t know my husband let me just explain that he’s a very principled person and his anger was not simply over the loss of $3,000.00, but mostly the principal of the situation. It really burns him up that someone did something wrong and lead us to believe that he would make restitution for it and did not do anything to right his wrong. Leaving us to hold the bag and pay his debt. And not just that, but also the woman who’s car was damaged decided to ask for quite a bit more money than it actually cost her to repair her car, likely because she knows we’re gringos and is taking advantage, assuming we are made of money. But, if I think about it, I imagine if this had happened in the states there’d likely someone with their hand out, just the same as here. And, we did make the mistake in the first place of trusting the young man with access to our vehicle while we were away. It really urks that we pay the price for giving someone the gift of trust that we really thought deserved it. Sucks to be so wrong.

I’m sorry this has been such a negative post. Usually I’m all flowers and rainbows. So, I’ve said I’d share the good the bad and the ugly….this one is kinda ugly. I hope I don’t sound like I believe this entire situation was the fault of our former employee because I do realize that we too have to embrace our part of the responsibility. Anytime you give someone the use of your car you take the chance that something may happen. Its a risk to do such a thing and in this case we made a mistake. Also, we weren’t aware of what the laws are here in regards to car insurance and what happens when someone you allow access to your car gets into an accident. Even though , technically, we never gave him permission to drive the car off our property. In the end, we’ve learned a lot and will never make the mistake again. Now, lets hope Scott snaps out of his rotten mood and we can get back to Flowers and Rainbows!!! Hah! Life goes on…
These are wildflowers growing near the site of our new house…so pretty! 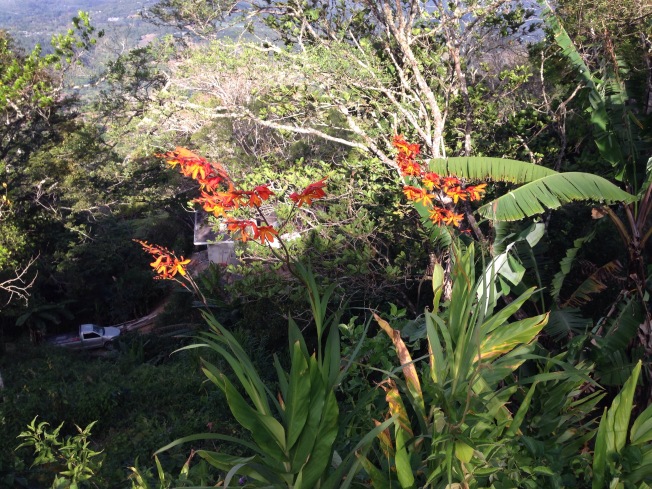