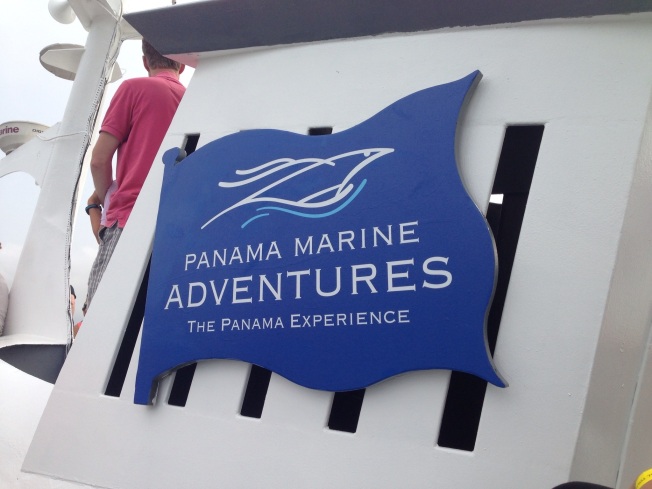 As you know, we spent the weekend in Panama City attempting to get our fingerprints done in order to begin the process of applying for our Permeant residency visa. We have heard various stories, (most bad) of other expats attempting to do this very same thing to differing successes. Without exception each telling has required multiple attempts to attain fingerprints that the FBI will accept (apparently the panamanians don’t know how to do them the way our FBI likes !) . Many such stories tell of as many as 7 or 8 different tries! Yikes!! We had read on one of the expat forums here in Panama that it’s also a very good idea to go directly to the FBI web-site and actually print out the fingerprint form that they use because many people got to the DIJ (the official place for this process) only to find that they are all out of the form!! We printed out multiple copies of this form ,”just in Case”! Good thing we did that because the lovely young lady at this office asked if she could make copies herself because she indeed had none!! Ha! So armed with every single piece of paper and copies of everything we could think of , including copies of our passports, we felt prepared,(NOT!). Of course we requested that she do both our prints two times, “just in case”. It was a very time consuming ordeal but we remained “Tranquilo” throughout! I was sadly disappointed when she told us we would need to return the following week to pick them up!!!NOOOOO!! We really did not want to go back to Panama City AGAIN next week!! UGGG!! But we asked if our attorney could come get them and she said yes. Whew!! But she needed us to provide her with a passport picture when the prints were picked up. “Ok, we can figure out how to do that”. I’m thinking to myself,”@!#$! What!! Where are we suppose to get passport pictures?” We said our good-byes to the very helpful,(albeit, quite frustrated with my inexperience in the proper fingerprinting procedure?) and off we went to try to figure out if our attorney would be able to arrange to pick up the prints next week. Mind you, we have never actually met our attorney, we have only corresponded with her via email so far. We immediately sent her an email explaining what we needed and hoped to hear back from her asap. I did also try to phone her at both her office and her cell phone with no luck. We figured this was a good time to start DRINKING! We remembered seeing a Brew Pub just across from our hotel!! WHoot! WHoot!! We hailed a taxi and made a Beeline to said Brew Pub and wait to hear back from our attorney. Oh, I almost forgot to tell you about how we succeeded in acquiring the additional passport photos… after exiting the very crowded DIJ, there were the usual venders outside selling food and who knows what else and Scott saw one little kiosk that said “photos”!! Yep! Right there we stepped inside and the guy took our pictures with his little camera and Voila! We had our additional passport photos. It’s impossible to ever predict what will be difficult to do here and what will be strangely simple!

Of course Friday came to a close with no word from our attorney so we decided we would go ahead and make arrangements to go see the Canal the next morning (Saturday). We figured we would be able to contact the attorney after we got back home to Boquete. Worse case scenario we schlep back to the city again and just get done what we need to get done, (Big Eye Roll here!). We made a reservation and paid for tickets to go on a small boat tour through all the locks in the canal (an all day event). Then , Of course , who do we finally hear from? Yep, you guessed it, our attorney! Telling us to meet her at 10:00a.m. on Saturday! UGGG!! We told her that because we had not heard from her we made arrangements to go on a tour and we could not cancel it. She said she could indeed arrange to go pick up our prints and deliver the passport photos but we would need to provide her with a deposit to retain her services as well as a signed document to authorize her to pick it up for us. No problem. Whew, disaster diverted! Now it is monday and we are trying to get ahold of her to learn how we make arrangements to both send her the photos and our authorization and how we will get her the money for her retainer? All will work out, not without a bit of hair pulling and nail biting at times but as I am constantly reminding myself about many things, “Poco a Poco”. And Breeeeeathe! Ahhhh….There we go, Tranquilo!!

When I began to write this post I was intending to tell about the canal tour. Needless to say, it was spectacular! It wasn’t the most “Exciting” thing we have ever done but we really enjoyed it. We were especially glad we chose to do the whole canal. They had an option to do a partial crossing and I’m sure that would have been fine as well but we really wanted to experience the entire crossing at least once and we figured, what the heck! Most people I know who have been through the Panama Canal have been on huge cruise ships. Being in a (relatively) tiny little vessel going through the canal really made us feel as though we were actually “in” the action! We could see every aspect of the process and the narrated tour really added a lot of information that made it even more enjoyable. I am dumbfounded by all the work and engineering that went into the building and designing of the Canal! Especially given the period that it was done! Wow! What a marvel of human endurance and ingenuity! I just cant say enough about how impressed I was to see such a magnificent thing up close and personal. I will include some of my pictures to share with those who have not had the pleasure of seeing it in real life yet. One other thing that was pretty cool , they have a live web-cam and so I quickly texted my mom and Scotts mom so they could go on line and actually see us going through the canal! I don’t think either one was able to figure it out but had I known beforehand It would have been fun for them to be able to see it.

All in all, our impromptu weekend away was pretty successful. We feel good about accomplishing our first attempt at acquiring our fingerprints , I will keep my fingers crossed that I will be able to tell people, someday , that it wasn’t that bad . (I know, I know, wishful thinking! ) . And seeing the canal is one more thing I can cross of my list of things I wanted to see in the world. We also had never really had the time to do a little exploring of Panama City so we are glad to have that done as well. The Journey on the bus from the city was a bit harrowing because there was quite a good size storm the entire drive. On the Pan American Highway there were many fallen trees partially blocking the road which added about an hour to our already 7 hour ride! I was glad to have my trusty kindle so I could lose myself in a good story during the whole bus ride! (By The Way, for those of you who miss my book recommendations, I was reading The Physician by Noah Gordon, I really enjoyed it) We both agreed that we were overjoyed to return to our new home here in the highlands of Boquete!! It’s much more our style, not so hot, crowded and busy. This morning it was good to be awakened once again by the sound of the roosters crowing in the distance and the birdsong outside my window. Ahhhh, good to be “HOME”! 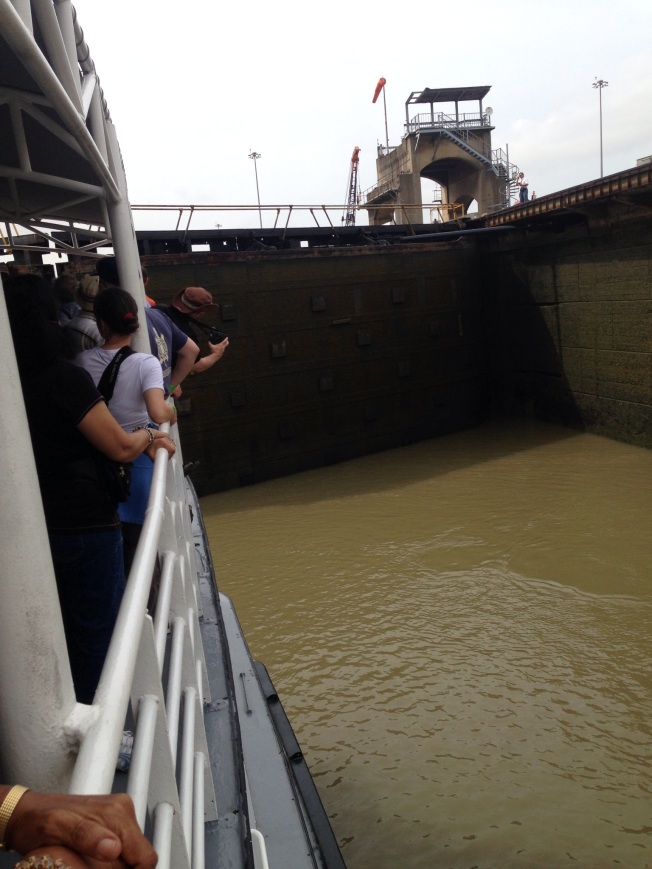 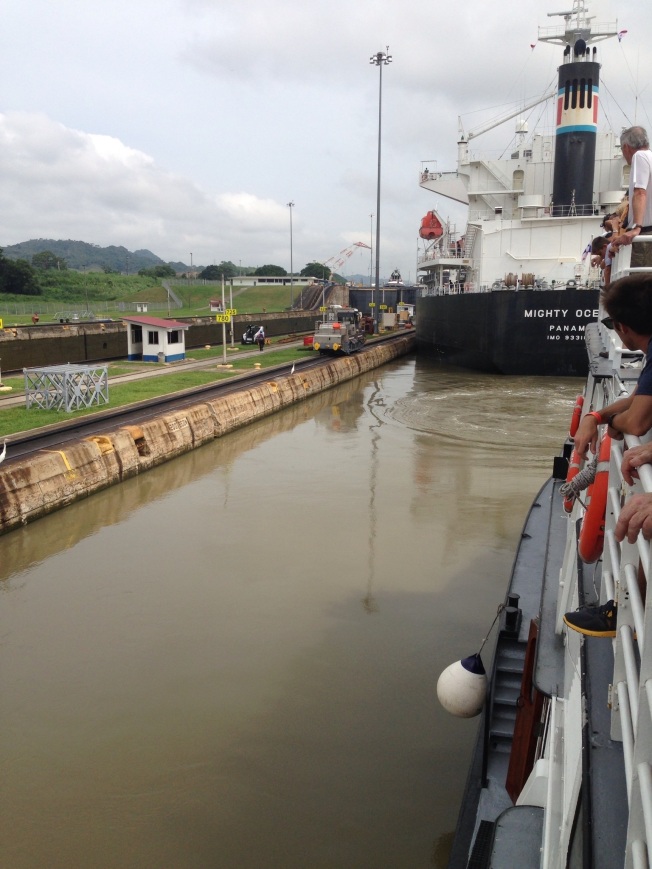 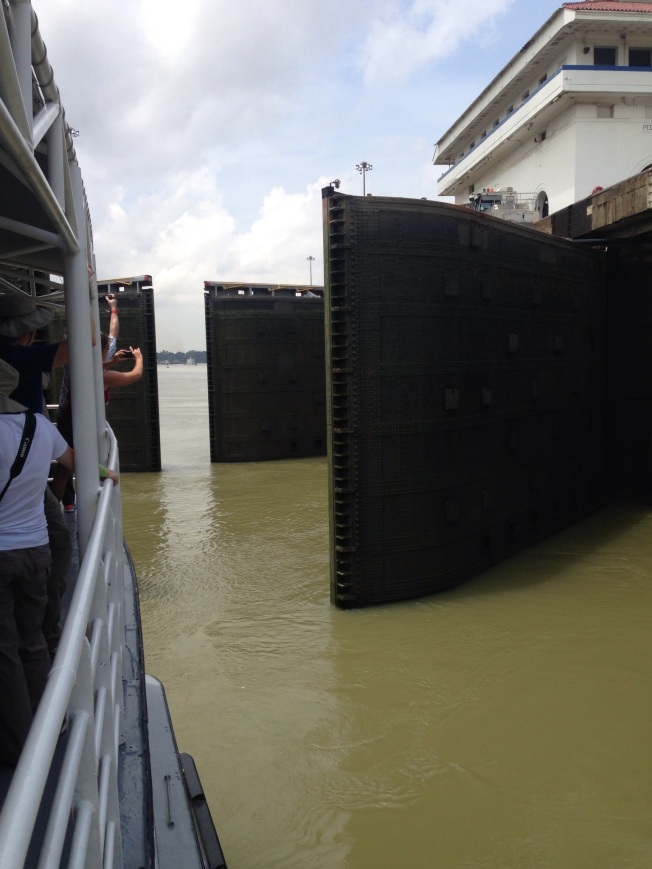