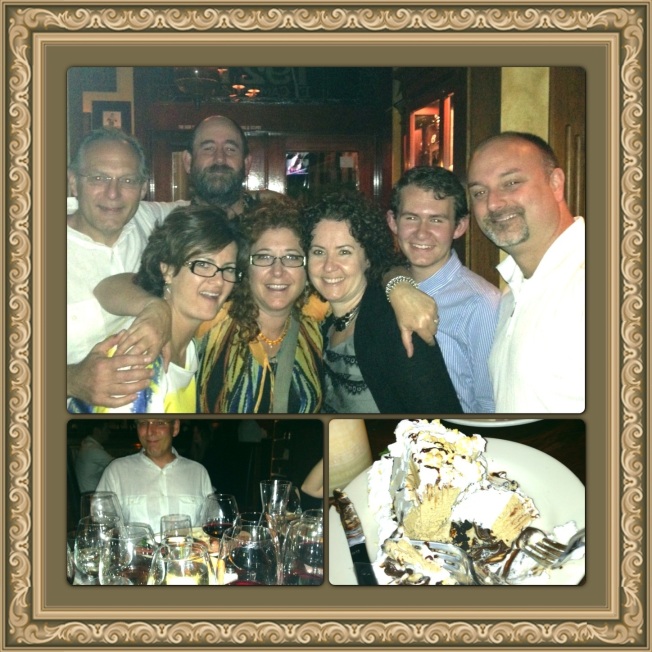 I told Scott that before we leave I really wanted to have one more dinner at my favorite steakhouse, Sundance. I just love the food, it’s a good old fashioned steakhouse, but truth be told, the Mud Pie is to die for!! We don’t get to go there too often but I’ve had it in my head that we would get one more visit in before our departure on May 28. When My friend Cathy said she and her husband Jim and their son Alec, wanted to find a time to get together with us before we go, I had a lightbulb moment! “How about Sundance Steakhouse?” They agreed and I booked a reservation for Saturday at 7:30. Then Cathy’s sister ( also my dear friend) Sandy and her husband Rob , wanted to join us so a party had evolved before I knew it.
Scott and I have always enjoyed spending time with these friends and this dinner was no exception. Who can go wrong with delicious steaks, Amazing wines, and great conversation with a group of good people. Jim & Cath brought two bottles of exceptional wines to share with us . And Alec,( who may someday become a consummate Sommmelier) chose an Amazing Cab from the menu, what 16 year old do you know who can do that? It’s amazing to be around a young man who has such a passion for food and wine, I think he’s destined for big things someday, I can’t wait to see what path he chooses.

The fun part , besides the meat and wine, was reminiscing with our friends about when we first met and our friendship began . It all started with Sandy who is an Optometrist , she owned an office just down the street from my salon , I walked into her office one day ( over 10 years ago) and introduced myself. It was a beautiful new office in town and I just like to welcome people to town and get acquainted with new people. Not long after we met, She began coming to me for her hair , I got my eyes cared for by her and we just hit it off right away, a kindred spirit for sure! I’ve always admired Sandy’s ambitious , adventurous spirit She’s a person I just love to be around. I love the way she thinks and I always know that if I want smart, honest , often witty advise or opinion , Sandy can always be counted on. Not too long after we became friends Sandy’s sister Cathy and her family decided they wanted to relocate from Pennsylvania to Sunny California. Of course they needed haircuts (Who Doesn’t?) and I hit it off with them right away, no surprise ,another friendship was formed. One of the focuses of Me and Scott’s friendship with Jim and Cathy has always been our mutual admiration of FOOD! Good food! Gourmet food! Scott and Jim are the cooks in this group! Me and Cathy are the lucky ones, right? We’ve spent many evenings with these folks enjoying not only eating together but also getting great pleasure in the whole process of preparing elaborate menus ,(Scott & Jim enjoy this part) then gathering at one another’s homes to let those guys do their magic ! Cath and I get great pleasure in preparing the cocktails (Most important!) and perching ourselves at the counter where we chat and supervise as the magic unfolds before us. Those two men can cook! And they share a passion for cooking with top notch ingredients and preparing food that wayyyyyy surpasses any 5 star restaurant I have ever been to ( not like I’ve been to a lot , but you get it?)

I’m so glad that Sandy and Cathy and Jim fell in love with California and decided to move here. In past blog posts that I’ve written about people I come into contact with who inspire me to have the experience of starting over in a new place and getting out of our box, these three are on that list . Even though they didn’t move to a whole different country to start over, it was still a huge, brave, adventurous decision to begin again on the West coast. They sold everything and left all they knew to have a completely new life. And it’s paid off. Life is good for them here and I don’t think they have ever looked back . They ‘get’ our craving for a fresh new start and an adventure more than most. Hopefully that ‘adventurous spirit’ they had when they moved to California is still alive and well , because we’re expecting to have them over for a group cooking and drinking night in our new home in Boquete someday! And I hope it will be someday sooner than later!! I’m sure as soon as they are ready to come out Jim and Scott will start the emailing back and forth to strategize about the menu they will be preparing in Panama! And Alec, will stash some good wine in his suitcase, right buddy? LOL! The moral of this post is… Sandy,Rob,Cathy,Jim and Alec are good people who Scott and I have shared many good times with and look forward to more good times in the future. Cheers! Here’s to Cookin’ good food and drinkin’ great wine with GOOD PEOPLE! 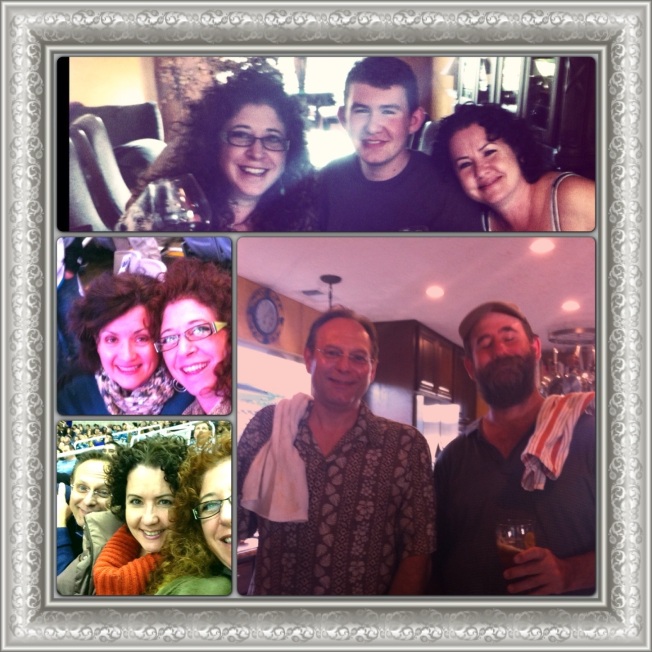